More than what I have spent 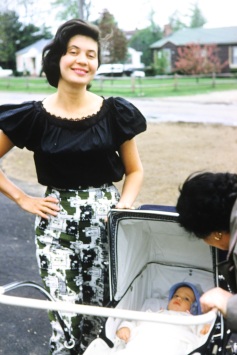 Yesterday I bought a cemetery plaque for my mother’s grave.  The inscription will read, “Loving mother, kind soul, and free spirit.”  My brother came up with “free spirit” because my mother lived life on her terms. She was separated and divorced in the 1960s when splitting from your husband wasn’t so acceptable. She did as she pleased as a single mom, again, before this ever became okay with society.  I came up with “kind soul,” because of her gentleness and thoughtfulness toward others, her compassion, much stronger than my own. I watched my mother cry over dying peers while she, herself, was dying. She felt bad for people on vacation in summer, people she did not know, if it rained all week. She was no saint, but she was our mother, so “loving mother” was easy to come up with. She died six months ago today on February 6, 2016.

The plaque costs $2,600 with installation at Sharon Memorial Park. It took me a long time to adjust to the thought of plunking down so much cash for an item that is essentially unnecessary. My mother’s body lies in that grave at Sharon Memorial, but that body no longer houses her essence, and that body will soon be nothing but bones.

I have shopped online a few times since she passed to try to find “a deal,” something that might knock $500-$600 dollars off the price. The Zelman side of the family, my father’s side, has a tradition of always seeking a deal, even in the circumstance of death, apparently.  You can buy anything online now. I wouldn’t be surprised if Amazon.com offered cemetery plaques, but I didn’t actually check their website.

The cemetery won’t allow anything but bronze plaques to pay tribute to the dead buried there. My research showed that at most, the online dealers could save me only a couple of hundred dollarsor. So, each time I researched, I delayed the purchase, hoping that prices would improve. I was not ready to commit to the plaque. Mourning takes many forms, including the inability to spend a few thousand dollars to honor your mother.

In the end, I didn’t trust the quality of product or the customer service of any online monument store. Who is behind such websites? What if I needed to return the plaque? What if I found a defect after it had been installed? Would I have to dig it up and ship out a 100-pound rock? In the end, I chose a local monument dealer, and the price included a marbled granite frame to anchor the plaque. Very pretty.

Today is Saturday and my mother died on a Saturday.  She had been such a pretty, vibrant woman for most of her life, but Saturday, February 6th was the last day of her life. When I arrived at the nursing home, her breathing was so shallow that every breath sounded potentially like her last. She had been in a coma for eight days. She had surprised the hospice nurses by lasting so long, the time in the coma and not eating or drinking for the last week she was conscious. Yet her body endured for fifteen days without nourishment. She had a strong heart. She had a good heart.

“It will be this weekend,” said Karen, the morning nurse. “Your mom will pass this weekend. I don’t think it will happen on my shift, but soon.”  I watched my mother and listened to her shallow breath for a few hours. I said, “I love you, Mom,” but I don’t think she could hear. I was told that all the senses go as one dies, with the hearing going last. I knew she was already blind, having seen her focus-less, clouded right eye, when the lid had been opened inadvertently while the hospice aide washed her near the end. I had squandered many a chance to tell her I loved her or to apologize for my bad behavior while she was still conscious. Perhaps she knew of my feelings anyway. My poor mother is dying. I shifted, got up from my seat, and left the nursing home for a break and some lunch.

I was watching television as I ate my sandwich, trying to find the will to travel back to the nursing home to spend the afternoon with my mother. I procrastinated for nearly two hours after I finished eating, with dread spreading through my heart and soul, as well as crawling up and down my limbs. I had been visiting her for two and a half months at the nursing home, and each day, she was sicker than the last. I almost couldn’t bear another minute. Eventually, I did make it to the car, but it was well after 4:00 in the afternoon. My mother was spending her last weekend on earth breathing shallowly, and I had waited so long to drive back, instead had decided to spend time watching reruns of The Mary Tyler Moore show.

Karen’s shift had ended well over an ago, and as I was driving, the afternoon shift nurse, Kelly, called.

“Mom passed” she said when I answered. I was five minutes from the nursing home.

“Okay, I will be there in a few minutes.” My mother was dead. I arrived at the nursing, and spent a couple of more hours with her  corpse until the funeral home picked up her body.

The words “Mom passed,” still ring in my ears every so often, when the late afternoon sunlight hits my dashboard as I drive through my home town. Down Pleasant Street, soon to take the turn onto Prospect. “Mom passed.” A bright, sunny day in February, the words and the scene play like a touching and sad film in my head.

My mother would not have wanted me to spend money  on a plaque for her grave. She especially would have balked at my spending such an exorbitant sum.

“Save your money,” I can hear her say. “I don’t want you to spend it on me.” She hadn’t even wanted a funeral, because she was afraid my brother and I would have to pay for it. In the end, she had saved enough to pay for her own funeral, although I was the one who made purchase on a cold winter evening, picking out a coffin and answering questions about prayers and limosines.

I have spent the last six months trying to come to terms with her no longer existing on this earth and no longer living in my house. Sometimes the mere sight of some house detail – like the blue and light gray stone floor in the kitchen where she stood as she cooked meals and did the laundry for more than a dozen years – can render me speechless. Or the sight of the staircase, with its worn beige carpet, where I witnessed her climbing to her bedroom each and every night. On so many of those evenings I joined her to watch TV. Thousands of evenings.

A plaque is a way to memorialize and honor my mother, but someday, the rest of the family will be gone, the human race may be gone, and perhaps we will have blown the earth to bits. What a waste of $2,600 should the plaque explode with the entire earth someday.

Most of the time lately, I do not want to move out my house although I periodically bandy about the idea of buying a condo, of moving out of this town. I have lived in the house for fourteen and a half years, most of those years with my mother, until I had to push her into a nursing home nine months ago. She kept falling, she was incontinent, dehydrated, often she didn’t make sense, she forgot how to use a telephone, she wouldn’t press that goddamned “I have fallen down and can’t get up button.” She was entering end-stage cancer. I could no longer care for her.

When I am not considering moving, I decide I will make the house new again – refinish the hardwood floors, possibly have hardwood added to the stair case and bedrooms upstairs, new paint, new furniture, same house, but reborn. These kinds of upgrades cost money. I have been feeling paralyzed and unable to proceed with any house upgrades. My mother’s grave needs a plaque.

I dreamed about my mother last week. One night, before I fell asleep, I said out loud, “I miss you mom. I’d like to dream about you.” And she came to me that night. Nothing significant happened in the dream. She was back in the house, although my house appeared different. I’m not even sure she spoke a word, yet I felt our connection. I thought I was awake during the dream, as her presence lingered. In the darkly comic tradition of my family, I said to her, “You know you’re dead, right? You know you can’t stay here.”

The day my mother died, I was aware of my heart; it felt enlarged and warm, very present in my chest as if her soul were passing through mine on her way to her new existence, a place I could not comprehend as an earthbound body.

This week, I woke up knowing I would buy the plaque. Not only did I realize this, but I looked forward to making the purchase. My heart felt the same warmth and connection as the day she died. After I left Quincy Memorials and left a down payment on this useless, impractical, expensive piece of granite and bronze, I felt my heart swell. The next day, I also found myself calling a handyman and junk haulers, something I had been unable to do since her passing. I  spent $229 for two tickets to see Rent in Boston when it tours in 2017 for its 20th anniversary. I felt free to spend money on my house and on myself only after I spent $2,600 on that useless plaque.

Sometimes, events need to arrive in a certain order that may contradict, if not actually defy, logic. Honoring my mother had to come before hiring someone to haul away her dresser. Her death had to come before my regrets. Her no longer existing on this planet made me realize how important she had been in my life. My compassion came after her death.

You are worth so much more than what I have spent.

This site uses Akismet to reduce spam. Learn how your comment data is processed.